REGARDING JOHN MILTON’S masterpiece, Paradise Lost, literary critic Samuel Johnson wrote, “None ever wished it longer than it is.” One could not say the same thing about American luxury-car interiors of the past few decades. With a few livery-market or export-only exceptions, neither Chrysler, Cadillac, nor Lincoln has recently offered the expansive rear-seat experience the rest of the world takes for granted in a prestige sedan.

This new Continental, by contrast, brings to mind a 1956 advertisement for the Lincoln Premiere: “Never before a Lincoln so long . . . and so longed for!” The front half of the car is a derivation of the Ford CD4 platform familiar from the current Fusion, but there’s nearly 10 inches of additional length, much of it behind the B-pillar. It has not gone to waste.

Grasp the massive, polished loop of the electromechanical latch that stands proud on the door, and step into the back seat. Our Reserve-trim test car, which sits below Black Label but above the base Premiere and midtier Select trims, has optional power-reclining rear outboard seats with four-way lumbar support, as well as heating and cooling. The center seat folds down to expose a comprehensive control console. Using that and the door-mounted controls, the Very Important Person in the right rear corner can move the front passenger seat (if vacant), operate the rear sunshades, adjust cabin temperature, command the audio system, and manipulate the opaque fabric shade beneath the massive dual-pane moonroof. 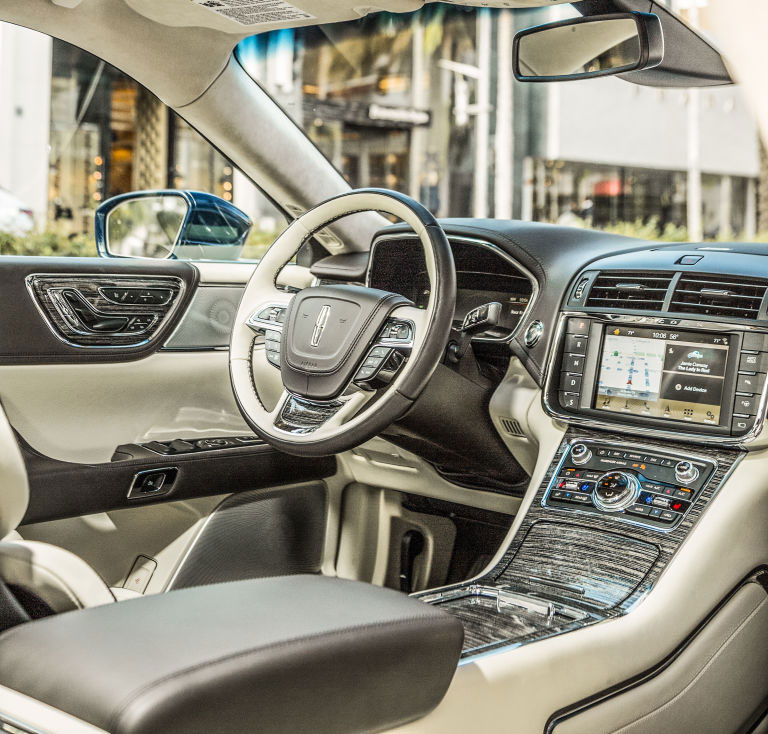 During my three-day weekend with the Continental, I experienced considerable difficulty getting any of my friends to ride up front with me. Given a glimpse of the first-class cabin behind the driver, each of my passengers demanded that they sit in back while I drove them. One suggested I wear some sort of cap while doing so. The most demanding VIP of all was my seven-year-old son, John. He immediately mastered the full range of rear-seat control possibilities, to my immense sorrow, and pointed out that it is possible to lay the front passenger chair down to serve as a footrest. No Shanghai tycoon was ever a more peremptory or capricious tyrant to his valet, but I was pleased to have him back there, guarded by the vault-thick, soft-closing doors and an airbag-equipped shoulder belt.

Continental owners who insist on driving themselves will find a separate but equal share of luxury. Optional 30-way front seats offer individual adjustments for left and right thigh support, as well as multiple massage settings, but the greatest luxury is the Revel Ultima audio system, also optional, which alternately bellows and whispers through 19 speakers. The decadent-looking machined-metal speaker grilles in the front doors, with a perforation pattern reportedly inspired by George Harrison’s “Here Comes the Sun,” would not be out of place in a Maybach or Phantom. This is a hell of a sound system, capable of isolating the marimba part in Vampire Weekend’s “Horchata” so that the instrument appears to float in the air above the steering wheel. I found this out because my son played that song seven times in a row, for his sadistic amusement.